Monty Joynes began his literary career with George Garrett at the University of Virginia where he met and drank coffee with William Faulkner and other significant literary personalities.On to Europe after graduation, Monty wrote and directed a television feature film for KRW, a Swedish production company. While in basic training as a draftee in the U.S. Army during the Vietnam War era, he was advised that the film had won a film festival award. Monty served with the 91st Evacuation Hospital.

In the late 1960s Monty was writing short fiction and wrote and directed his second film, The Graz Experience, shot in Austria.

By 1970 he had founded Metro Hampton Roads Magazine. Within four years the slick magazine was in color and averaging over 100 pages a month. From Metro, Monty went to Holiday Magazine, the original national travel magazine published by The Curtis Publishing Company. By that time he had authored over 200 magazine features for publication.

In 1985 Monty and wife Patricia moved to the Blue Ridge Mountains of North Carolina with the objective that Monty would focus on his literary career. He did find time, however, to become the founding president of the Blowing Rock Stage Company, an Equity summer-stock theater.

Critics acknowledged that he was one of the most important authors in a new literary genre—Visionary Fiction—with the publication of these four novels in the Booker Series.

The fifth novel in the series, The Psalm Maker: The Journal of Booker Jones, was published in 2013 as an Amazon Kindle book. The novel is a first-person narrative by Booker himself.

In 2004 Monty was asked to co-author a making-of-the-movie book with James Redfield for his metaphysical best-selling novel The Celestine Prophecy. The book appeared in October 2005.

Asked to do a second making-of-the-movie book, Monty wrote the narrative and directed the still photography for the film Conversations with God, Neale Donald Walsch’s bestseller. The book was released in September 2006.

Monty’s first biography was Journey for the One: The Biography of Jeanne White Eagle and John Pehrson. The book documents the couple’s worldwide peace mission to end separation between conflicting cultures. After three years of work, the book came out in September 2008.

In 2006 composer and concert pianist Edmund Barton Bullock, an American who has lived mostly in France since 1978, contacted Monty as someone who appreciated his literature. Their friendship resulted in a collaboration to write and compose a classical music oratorio.

Monty completed the libretto for the oratorio The Awakening of Humanity in 2007. The oratorio premiered in part in France with three performances in 2015. The completed work was then developed for performances in both the U.S. and France in 2018. Monty has also written libretti for two three-act operas adapted from his novels Save the Good Seed and Eagle Feathers In Glass.

In the summer of 2007 Monty began painting after a 40-year hiatus. In the mid-1960s he had been identified with the Scandinavian Bauhaus Situationist art movement and enjoyed professional success as a young artist in Europe. Averaging about six paintings a year, his catalog of new works continues to grow.

As the book marketplace experienced an e-book revolution, Monty published two orphaned novels as Amazon Kindle books in 2011. GRID is a futuristic romantic adventure played against the color and traditions of New Orleans. Monty also adapted a feature-length screenplay for this novel. Flesh is a science-fiction horror epic about a secret society that believes that cannibalism has health benefits. The macabre humor is intended to be allegorical.

Asked to write an account of his visionary experiences, Monty wrote Confessions of a Channeler: A Reluctant Man’s Journey into Mysticism. The cover and more than 30 additional photos used in the book were taken by Monty’s wife Patricia. The book appeared in the fall of 2014. 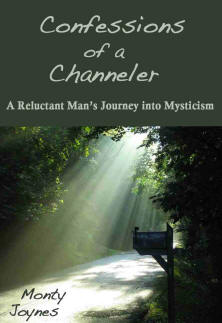 Monty’s second biography, published in the summer of 2015, was For Love and Treasure: The Life and Times of the World’s Most Successful Treasure Hunting Family. Research for the book included a month of residency with the famous Fisher family in Key West, Florida.

In the field of military combat fiction, Monty won a national award in 2011 for his short story “First Day at An Khe.” He continues to publish stories and poems in that genre.

Included in Monty’s body of work are five feature-length screenplays adapted from his own novels, two from the novels of others, and two short films, which he wrote and directed on European locations.

St. Leger Moncure Joynes, Jr., born in Norfolk, Virginia in 1941, is a member of the Alumni Hall of Fame of Granby High School (’59), a graduate of the University of Virginia (College ’63) and an Honorary Citizen of the City of New Orleans. He and his partner-editor-wife Patricia, reside high in the Blue Ridge Mountains of North Carolina. They have three daughters and eight grandchildren.