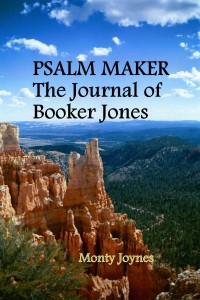 Psalm Maker: The Journal of Booker Jones  is the fifth novel about an Anglo man’s entry into the social issues and metaphysics of contemporary American Indians. The first four novels in what has become known as The Booker Series (NAKED INTO THE NIGHT, LOST IN LAS VEGAS, SAVE THE GOOD SEED, and DEAD WATER RITES) are third person narratives about the man’s physical and spiritual adventures among the Pueblo Indians and other tribal peoples of the American Southwest.

The final book in the series is written from the point of view of Booker Jones himself as he evolves into a deeper spiritual experience, finds a female companion, and comments on the events that were dramatized in the first four novels. For many readers of the Booker Series, access to Booker’s inner life as expressed in his journal entries makes Psalm Maker their favorite book in the quintet.

Psalm Maker is full of memorable characters and dramatic events that propel the reader through a cross-cultural adventure that has meaning for all humanity.